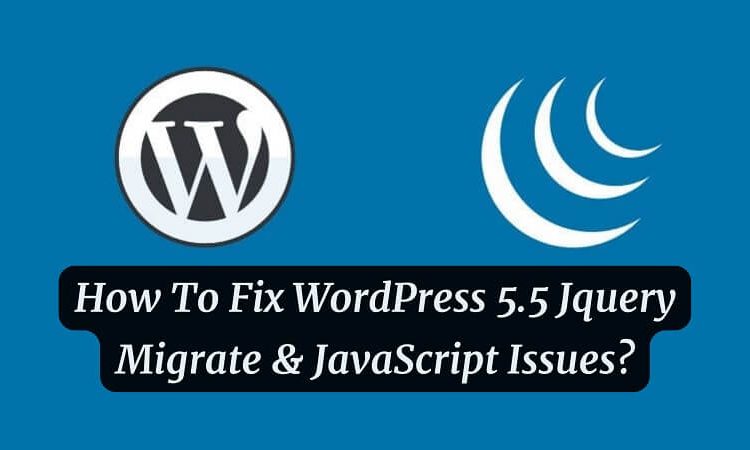 Hello guys, today in this blog post, we are going to discuss how to fix WordPress 5.5 jquery migrate & javascript issues? So keep reading.

Excerpt: There are numerous tools available today for web development applications and website design. However, WordPress is the most talked-about topic in town. Many people are familiar with the term WordPress, which is most popular among techies. New versions have already been released, but the most recent WordPress version is WordPress 5.5.

WordPress 5.5 has been a huge success. The release of WordPress 5.5 “Eckstine” added several amazing features to the platform’s center, making it a success largely. As we discuss the update, some unavoidable issues arise.

There have also been innumerable theme and plugin squabbles that already have induced sites to split. The company dropped support for JQuery Migrates with the recent update to WordPress 5.5. In much less than two weeks, it apparently took down hundreds of thousands of websites. A few WordPress themes and plugins use outdated jQuery scripts, which can lead to a variety of issues. Countless issues were reported by several users of such popular plugins.

Let’s talk about the issues and what can be done to fix them.

Among the many kinds of plugins that have been affected was security. Users were also having issues with optimization, styling, and other plugins.

Some users may be having problems with their themes due to outdated code. However, throughout this case, some of the issues were caused by plugins being bundled with the corresponding WP themes. Premium page builder and slider plugins, for example, are frequently included with some themes. However, guess it depends on your software license; they may or may not be updated to the latest version because they are premium. If upgrading to the newest version of a theme does not really solve your problem, you could perhaps reinstate functionality by installing the WordPress Enable jQuery Migrate Helper.

But keep in mind that it’s only a short-term fix. Troubleshooting your site to determine what feature is causing the problem may be beneficial. To learn more about troubleshooting, keep reading.

For Candidates who want to advance their career, WordPress Training is the best option.

Here’s an example of how an error might appear:

Once you press on the file, a new screen appears with the error. After that, you can click the red X icon to see what the error is.

Common Conflicts After Updating To WordPress 5.5:

Many of the problems that some publishers are having after upgrading to WordPress 5.5 are related to site functionality being lost.

Problems with the WordPress 5.5 Update

These are just a few of the issues that users are having.

You’ve probably already heard about the new features in WordPress 5.5, which are most obvious and noticeable to users. However, many web pages, developers, and website administrators have been negatively affected by the WordPress 5.5 update. Its because the above update included a significant internal change that caused issues in a number of places. We’re talking about the deactivation of the jQuery Migrate tool.

What Is jQuery Migrate All About?

In other words, irrespective of the version of jQuery installed by default in WordPress, it allows the use of obsolete code. As a result, theme and plugin developers could relax and use the WordPress version of jQuery that they deemed appropriate. However, in a system that’s also constantly updated and where the latest resources are always sought, this makes little sense.

If you work in web design, you’re probably familiar with the jQuery library. jQuery Migrate, like jQuery, is a JavaScript library that has permitted plugin and theme developers to be using outdated jQuery code for decades.

Despite possessing outdated code, jQuery Migrate allowed a portion of many web pages to function. As a result, numerous web pages had already gone stopped working after it was turned off.

On certain sites, upgrading to WordPress causes pagination to fail.

Pagination refers to the navigation page numbers there at the bottom of a multi-page document; which you can easily find in a website’s category section. Pagination is a navigation structure that groups page lists together to help us navigate between them.

Some other workable solution is to deactivate the redirect canonical () function; which is connected to the template redirect action by default, for these requests.”

This function is extremely powerful and versatile, but it has a flaw: it replaces the original WordPress query, which causes the pagination to break. If you really have something similar to this:

You must see the identical entries no matter how many pages you progress within your pagination.

To fix this, we must use this code to rebuild the pagination with in new query that query posts runs:

How To Fix The jQuery Issue In WordPress 5.5:

Thanks to the WordPress plugin for restoring the jQuery migrate library. This plugin will restore functionality to your site. But the plugin somehow doesn’t address the issue with your website.

The plugin restores functionality to your site. However, it does not address the site’s issues.

An obsolete plugin or theme is the source of the site’s problems. If your image slider isn’t working, it’s most likely due to an issue with the image slider plugin. A solution is to update the plugin. However, if the plugin which thus needs to be changed doesn’t have an update; you’re presumably to use an abandoned plugin. An abandoned plugin consider which do not update for a long time.

Since some plugins do not require frequent updates, it is difficult to define what constitutes a “long time.”

Most plugin creators are working to improve their software. In general, if the developer had stopped updating the plugin for one year or more then it means the developer has abandoned the plugin. Moreover, it is best to uninstall that plugin. Abandoned plugins may cause security risks. Finding a rather more vigorously maintained plugin that does the same thing as in the case of an abandoned plugin is a good idea.

You will be in a better situation in relation to security and personal experience for your site visitors once you have repaired the plugin or theme.

How To Use jQuery Migrate Helper To Fix JavaScript Issues In WordPress 5.5?

Whereas the founders of your theme or plugin employment to fix problems with the deprecated code; you can take advantage of a momentary workaround by downloading and installing the below free plugin:

The plugin enables “support for old JavaScript code that uses extremely outdated functions in the jQuery JavaScript library,” which means it connects to the migration script; restores functionality to your broken plugins and themes.

WordPress 5.5 still has a lot of useful features for, among other things, building and designing simple and complex websites and blogs. The removal of jQuery, a fantastic JavaScript framework, however, has caused some issues or conflicts with both the core and the extensions. You can say that, for the most part, WordPress 5.5 is a successful version. We spent a couple of hours going over the list of potential bugs and also the WordPress community put lots of admirable effort to investigate and resolve each issue.

As long as you stick to one of the above solutions, you’ll be able to resolve conflicts, albeit only temporarily.